This past weekend I had the pleasure of taking my 3 year old, and very avid fisherman, Rowan down to Bangor to pick up a new Predator 13 kayak. He had a great time staying in a hotel and enjoying the pool, visiting the Children's Museum and of course paying is first visit to Old Town!

My fishing fleet up to this time has consisted of the Old Town Saranac 146 Angler Canoe, and the Old Town Dirigo 12 foot kayak. Both vessels are fantastic in their own way for different purposes, but I had been missing something. The Predator, with it's amazing cargo capacity, ability to hold one of my kids who are too small to have their own kayaks and amazing stability are all features that the Dirgo doesn't offer. I also wanted the ability to pee without going back to shore (lol).  I've had a great time in both the Saranac and the Dirigo catching lots of great fish, and will continue to do so. But this weekend was all about the Predator! 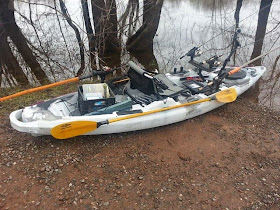 Rowan and I made the 3 hour trip down to Bangor on Friday, and the Saturday morning made our way to Old Town. The kayak, paddle and a PFD were waiting for me on arrival and Jeremy and others at Old Town made sure we had a great experience on site. They even let us bring the Predator to the on site demo pool where I was able to take Rowan out for a little test run on the new Kayak! 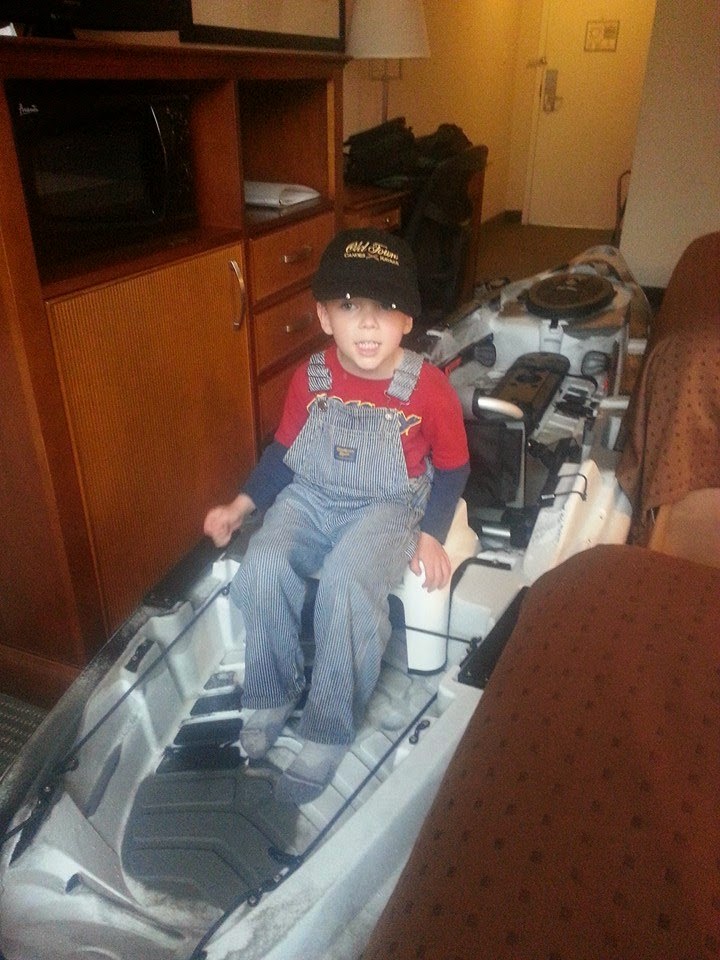 After browsing through the outlet store, picking up a few items I didn't realize I needed till I seen them, we brought the kayak out to the CRV. Obviously it's a bigger and heavier kayak than I'm used to with the Dirigo. I can pick up the Dirigo and easily lift it to the J Racks, but not so with the Predator. I think I was lucky not to have an accident on my first try in loading the Predator on the CRV but I made it! With practice I'll get the routine down, but really it is a big boat and someone smaller than me would really struggle putting it into J Racks on an SUV. I'm thinking the flatter racks is a better option for a boat like this for most people.

Finally once I got home I was able to dig a shipment I had received from YakAttack and another package with a variety of Scotty components. Now for the hard part... how to rig up the new kayak! The predator comes with several removable plates on which items can be mounted without putting any holes in the kayak, which is an awesome feature. My plan was to set each plate with an 8 inch track and then any rod holders and such that I mount will be interchangable. Also I put together my first Anchor Trolly which came out fantastic.

Also, I found that a small footstool fits neatly down right behind the seat in the Predator, making an ideal seat for a young child. My kids will love being in charge of the rods while trolling the lakes for trout! 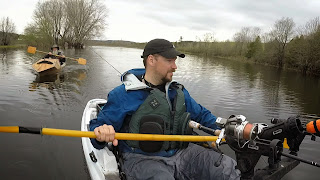 Finally, it's time to hit the water! I met my friend John Cail at the Darling's Island bridge once the rain subsided, and out we went. I took 4 rods with me, gearing up for trout/perch/smallmouth with 2 of the rods, and then sturgeon alley with the others. 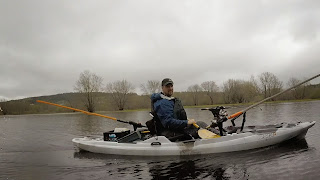 We landed tons of perch, then John landed a 15 inch striper on the Hammond near the train bridge with compeletly took us by surprise! Then out to sturgeon alley, when I landed a few catfish and a 29 inch American Eel. 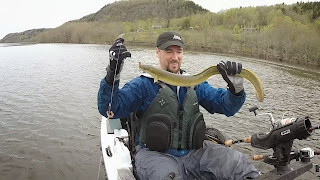 All in all I had a great day on the Predator 13. I did learn a few things though. First, you want to have the seat in the lower positon when paddling from one area to the next. If it's a short paddle, then the high position is fine, but not really suitable for 'travel'. Second, the predator is difficult to keep going straight in a river with funky currents. It really seems to drift sideways with the currents. For that reason I'm going to look into getting a rudder. Finally I found that I had way too much gear positioned in front of me. I'm going to put together a rod holder to attach to a mike crate behind the seat and lose the Scotty Triple holder from the Predator. The bait board is great, and the rod holders positioned on the gear tracks works great, but having the triple holder is a bit much.

Anyhow, I really enjoyed my trip to Old Town, and my first trip out in the kayak. I am definately looking forward to taking on some stripers, muskie, shark, sturgeon and other big fish in this boat! And I can't wait to take one of the boys out with me!

Update:  I just rigged a PVC triple rod holder to attach to the milk crate and added a few more Scotty tracks.    Now I can comfortably take 7 rods and all my gear!     .... thats not overkill is it? 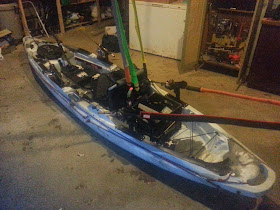